“Acting together sustainably – learning from each other – motivating each other – initiating measures: that is what the cooperation project ÖKOPROFIT® stands for.”

On 03.12.2019, IMS Messsysteme GmbH was officially honoured during the 5th season of ÖKOPROFIT® for its commitment to reducing both operating costs and consumption of resources and thus to making an active contribution to applied environmental and climate protection. 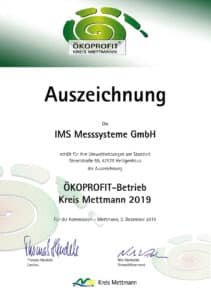 Of all the companies in the district participating in ÖKOPROFIT®, IMS invested the largest sum in climate protection. During the course of the project 152,563 kWh of energy and 369 t of CO2 were saved, which corresponds to a sum of € 26,000 per year.

The award ceremony was held at Kulturvilla Mettmann. Together with 8 other participating companies from the district, IMS, represented by Jörg Börchers and Marcel Döbbeler, was presented with the official certificate by Mr Michael Hermanns (Head of Department at the Ministry for Environment, Agriculture, Nature and Consumer Protection of the State of North Rhine-Westphalia) and the District Administrator of the Mettmann District, Mr Thomas Hendele.

ÖKOPROFIT®, as a nationwide climate protection project involving more than 100 municipalities, is not only sponsored in our district by the state of NRW, but is also supported by well-known, regional cooperation partners, such as the Chamber of Commerce and Industry, Chamber of Crafts, District Association of Craftsmen, German Hotel and Restaurant Association, Trade Association and NRW Efficiency Agency.

Another successful cooperation project, therefore, which makes it clear how important the subject of climate protection is and should be ecologically, especially regarding the production and service processes of companies, but also what economic potential active climate protection can have. A responsibility and chance that IMS Messsysteme GmbH is happy to take on and use!

In a nutshell, one can say: “The lights are green at IMS”, as the press also puts it.